Intalytics Commentary – The Pull of “Zoom Towns”, and Other Ways People Moved in 2020

With many high-profile companies implementing temporary or permanent remote-work policies this year, the link between location and earnings potential for their employees has significantly weakened.  This change has naturally caused many professionals to ask the question: “If I can work from anywhere, why am I working from here?”.

For those professionals who are fortunate enough to have had these options, some have reportedly fled expensive and densely populated urban areas (even with the prospect of location-specific salary adjustments on the table).  Others have relocated closer to family.  And others still are responsible for the surging home prices in vacation destinations like Aspen and the Hamptons.  This phenomenon brings to mind the boomtowns of the California Gold Rush, only now the growth of these “Zoom Towns” is driven by the combination of modern video conferencing capabilities and attractive amenities.  While this effect has strained resources and infrastructure in some resort communities, others are leaning into it as evidenced by a new initiative in Hawaii to attract remote workers.

To study some of these and other movement patterns from this year, Intalytics leveraged mobility data to look at who moved where in 2020.  In particular, we compared cities of residence for device holders in late Q3/early Q4 of 2020, compared to those same devices’ cities of residence in the first few (pre-COVID) months of the year.  Several of our findings are shared below.

The charts below illustrate mover patterns by market size and urbanicity.  Intalytics’ urbanicity categories are derived from measures of population density in each neighborhood, while our market size categories instead focus on the total population of a metro area.  Only movers who moved outside of their original home city are considered in this analysis.

The chart above demonstrates that for movers who moved out-of-market, there was on average a tendency to seek smaller metro areas (26%).  However, a majority of movers either stayed in-market, or moved to a market in a similar size classification.  Beyond seeking smaller markets, we also observed an average tendency by out-of-city movers to prefer less neighborhood density.  The next chart shows this preference, with a slight but pronounced skew.

There are many possible reasons for these aggregate outcomes in 2020, including:

All of these reasons notwithstanding, we also find evidence of the zoom town effect in the data as another driver of 2020 migration patterns.

Two widely reported metropolitan areas associated with the influx of zoom town residents are Manhattan and San Francisco.  Both of these cities feature vibrant technology and financial sectors, whose workers are among those best positioned to work virtually – both due to the nature of the work and the ease of travel afforded by the salaries that these workers command.  The map below shows where people who left these two cities over the course of 2020 ended up. 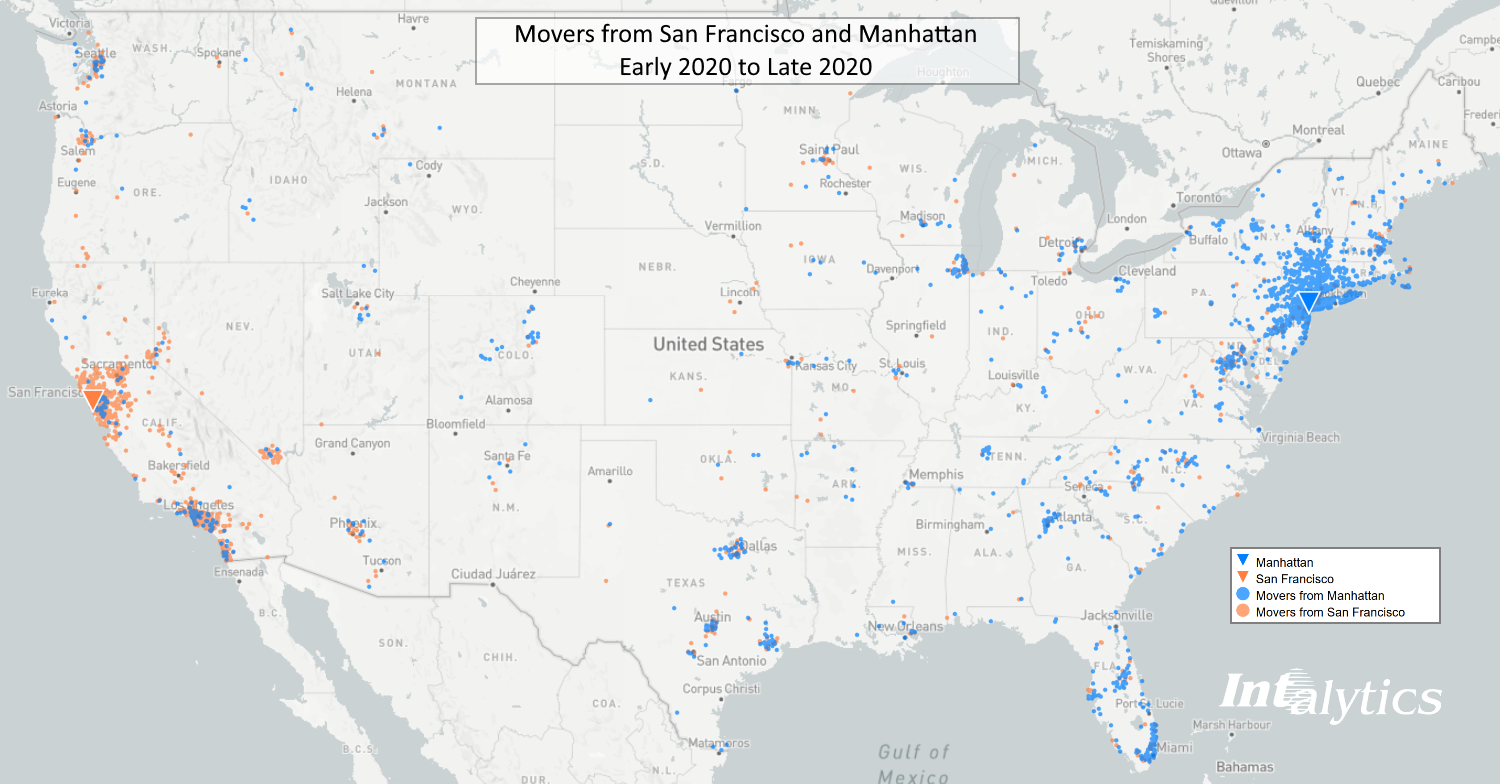 Please note that each dot is representative of a proportional number of movers.  Not all destinations are shown for visual clarity.

This map shows that for the most part, residents leaving San Francisco tended to prefer destinations in the western parts of the U.S. (and in most cases, stayed in California).  While residents leaving Manhattan similarly largely stayed in the eastern parts of the country, a decent proportion ended up in other major metro areas throughout the eastern and central U.S., as well as disparate coastal and mountain communities.  The top destinations for movers from these cities are summarized below:

Of note here is that according to our analysis, the collection of cities comprising the Hamptons are the number one destination for people leaving NYC this year, accounting for nearly 8% of all people who left the city.  Confirming this, CNBC recently reported that home prices in the Hamptons are up 46% in the third quarter of this year alone(!) as a direct result of this influx.

Beyond residents of Manhattan and San Francisco relocating to the aforementioned destination markets, what other communities were beneficiaries of the zoom town phenomenon in 2020?  We further mined our data to find other geographies where the current mix of residents looks significantly different than it did at the beginning of the year.  The table below highlights a few such communities, as well as others that have been covered more extensively by journalists: 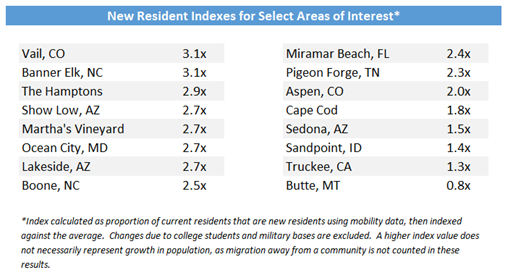 A number of observations from this analysis:

For brands looking to meet customers where they are, the natural next question revolves around whether zoom town real estate is worth chasing.  Unfortunately, there is no simple answer – and where there are answers, they will differ by brand and by community.

Many modern economic centers got started as boomtowns, experiencing drastic growth due to an abundance of a natural resource, a position as a prominent location for transportation, or a concentration of skills/businesses in a particular economic sector.  Today’s zoom towns are instead defined by their arms-length and virtual connection to the rest of society and the beauty of the surroundings.  While that has proven attractive to individuals looking to escape some of the stresses that 2020 has thrown our collective way, when a stronger semblance of normalcy returns, many of these people may inadvertently leave ghost towns in their wake.

ANN ARBOR, MI (Aug 4, 2021) - Claire’s Stores, Inc. has expanded its partnership with Intalytics to include analytics in support of driving new store..

At Intalytics, a Kalibrate company, we believe our success is driven as much by our people as our technology. So, as part of our new meet the..

Location analytics are a critical factor in driving strategic growth for retail brands. As tenants become more sophisticated in the use of data..

Location analytics are a powerful foundation upon which tenants can derive data-driven answers to business questions such as where to open new..

At Intalytics, a Kalibrate company, we believe our success is driven as much by our people as our technology. So, as part of our new meet the..

Apparel retailers have been buffeted over the past year. Comp sales growth was nominal leading into the pandemic – clothing stores in the U.S. comped..

Marketers should pay attention when their firms have contracted for a real estate site selection model. There are multiple benefits to the savvy..